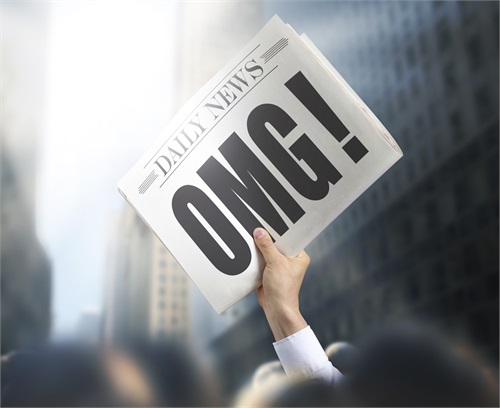 Here's a favorite investing mantra of ours: Ignore the headlines and pay attention to the fundamentals. Numbers are much telling than the emotion eliciting headlines. We will unpack "headline risk" shortly. First, let's define - Headline risk is that a news story may adversely impact investment performance. This can hold true for a single company or for the overall stock market.  Often when big enough companies become the focus of a headline, the market takes a breather.

Remember the BP oil spill in April 2010? Big oil failed and the entire world was going to become a petroleum covered mess... Now imagine we'd worked for BP most of our career and held most of our investments in company stock. BP sank from 59.88 a share to 27.02 a share in just two months, the headline (and costs of the spill) devastated BP and would have wrecked our portfolio. The negativity didn't stop there. The headline added to investor fears and contributed to a healthy pull back in the S&P 500.  On the day the spill began, the S&P 500 was at 1192 and by July 2nd it had fallen to 1023 - just a week after BP stock had reached it's bottom, the S&P 500 corrected by -14%. And nearly 5 years later, the world isn't covered in oil and our economy is still moving forward.

Now imagine this wasn't BP. Imagine it was Exxon Mobile. No energy stocks in the family? How about Apple, Colgate, Proctor & Gamble... Many of us or our family members may have a lot of money with a few companies. Cut that in half. That's what headline risk can do.

Headlines are built for impact. Fear is the fastest route to reaction, ratings and revenue. Blood sells, gradual improvement doesn't. Think over the last few years. Lehman Brother's fall, the recession, unemployment, Greece, EU financial crisis, debt ceiling, tsunamis, earth quakes, hurricanes, taxes, Obamacare, debt ceiling, government shut down, payroll tax, Russia & Crimea, the list goes on... For days!  Yet we're still here, if we didn't pay heed to the negativity and had a well diversified, strategic asset allocation, all those headlines didn't do nearly the damage we may have feared. Missing this investment environment would have been - the S&P 500 has nearly doubled since the BP oil spill and it has continued to hit all time highs.

We can't completely eliminate headline risk in stocks. By diversifying our portfolios, we may reduce the overall impact a single stock can have in our portfolio. And short of hiding under a rock, it's difficult to curb our own reaction to negative headlines. However, we can be more analytical, intellectual, and strategic. We can be less emotionally driven in our investment decisions. Our gut instinct is wrong more often than not when it comes to investing. When things are ugly, don't get scared, look for opportunity, when things are rosy, enjoy the fruits of our portfolio temperance and remember to re-balance!